A Theology of Fly-fishing


The line shot back and looped high, the light of the morning sun glinting off it like a magic gossamer. I was watching my son fly fish the Blackfoot, the wild river central to the book and movie A River Runs Through It. Actor Brad Pitt plays the role of one of two brothers with a stunt double to do the fly-casting. The scene in the movie was meant to be mesmerizing, but this scene was much more. There was the cool morning breeze whispering through the majestic lodgpole pines and glittering sunlight, fluid gold off the water. The sound of rushing whitewater tumbling over the rocks broke the morning silence, even as the Ravens cawed above. I sat on a boulder some 30 feet above him, standing on a rock in the middle of this 60-foot stretch of river.  We had hiked in for 30 minutes up a pine forested mountain trail, ensconced by evergreens singed black by the ravages of a recent forest fire that burned over 100,000 acres. Sometimes nature has stark ways of restoring the wilderness.

His line moved easily forward and back as he let out more leader, searching the water for a rise or sight of a silvery-sided cutthroat trout. The pools reflected the Montana “Big Sky” azure blue seemingly waving with the green of the towering pines. In front of a large boulder some 100 feet upstream there was a splash, a trout feeding. Looking around, the tiny caddis flies were visible, swarming over the stream.  His fly was perfect a deer hair caddis dry #18, barely visible on the end of a 10-foot tapered leader.

The loop grew slowly, widening above his auburn hair covered with his favorite,  well worn camouflaged Duck Commander cap. Now his arms were working more quickly to bring the fly over the pool. The loop stayed aloft, high above the water, now some 80 feet out.  The water rippled again. He was double-hauling the line to gain power and to keep it low so it wouldn’t catch in the branches.

Like a small insect falling from a twig his fly gently dipped to the water at the head of the pool. A small ripple appeared. Again the line drew back and forth, fast moving and releasing. The caddis alighted and the water exploded. The line went taut as he struck quickly back against the eight-foot, four-weight graphite rod with his wrist. The fish rose up as if in ballet on the water, falling back again; then three more times.  He was moving quickly upstream, as if imitating the dancing trout. Now above the pool, rod bent over, double. The sound of the drag zipping out gave notice that the fish was larger and stronger than average. It was quickly moving up stream against the current, trying to find a snag or rock to rub off the fly. He held the rod high above his head to keep the line taut, as any slack and the fish would shake out the fly.

He could now stand in the shallow water across from the fish and place pressure on the rod and line, careful not to break the light leader, while letting the reel slip out line between his fingers, lightly holding the reel. The fish ran out again as he let out line. Then slowly pulling in line, twice more. He could now see the silver sides with vibrant red gill plates and blue spots. It was fall, so the lower jaw was angled up on this 18-inch bull cutthroat.

He wet his hand in the icy water as he pulled the rod back with one hand and slipped the other under the wriggling fish. Reaching down now with his rod hand as the fish lay in his other, he slipped out the barbless hook fly with his fingers. The fish lay still for a few seconds to be able to view, the roguish gills pulsating, and then with a flick of its tail it disappeared into the deep pool to find safe haven.

Our eyes met, flashing with excitement as my son let out a whoop. The winds whispered above through the pines and the sky still reached to heaven above. You see God had created it all and was still there watching and approving.

The next pool was mine, as my line shot and looped, searching for a rise. The sun was now silver on the water and the eagle soared. 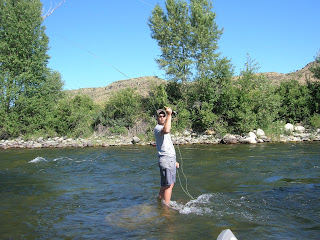 Posted by Frankly Speaking at 5:00 AM