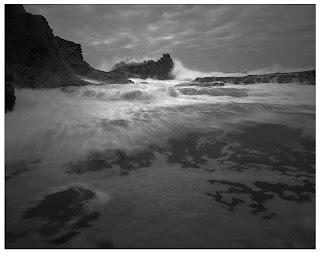 I just wrote on “Floods” and then responded to availability as a Disaster Chaplain for Red Cross through the Association of Professional Chaplains. Then I headed with my wife Pam to Lake Michigan to see how yesterday’s incoming gale force winds had effected the beaches and warmed the water. Well, in Port Washington, 15 miles north of our Mequon home there is a South and North Beach. There was one boarder in the water on South Beach, but not much beach as the high waves pounded the shoreline. So we headed to the other side of town and North Beach. There where waves were still coming in strong there was no beach. But the water was warming, maybe upper 60s and OK for swimming, so I thought.

I decided to give it a try. The waves had scoured out the sand down to rocks to I needed to just plunge in. Immediately the waves knocked me down so I launched out until I could swim into the monstrous waves. They currents had created rip chaos with high waves about six-feet breaking in all directions. It seemed kind of fun, so I just swam with my head down into a couple of waves that just hit me like a Green Bay linebacker. I looked back and realized that in a matter of two minutes the waves had pulled me a few hundred yards straight out.

Now I recognized that it was too rough to swim, so I turned and found myself immediately crushed by the waves. They tore at me from all directions. I was like a doll being tossed. But I am a strong swimmer having no problem swimming a couple of miles under normal circumstances. I was not making headway back to shore and the currents were taking me North. I just swam harder and got pushed down harder. Water was forced into my lungs. I choked and coughed most out and kept my crawl going. But the waves pushed my arms out like I was a CPR dummy. That thought penetrated. I was not making headway or overcoming the surf. I had to switch to sidestroke and then the other, and then breast stroke. My back stroke is strong, but the waves just rushed up my nose and forced open my mouth, filling it with algae.

It seemed like time began to slow as my body was wearing down. Now I could see my wife Pam pacing the beach and then she was gone through the waves. Perhaps I was now a little closer but running out of fuel. My heart rate ran up above 200 and I was feeling a great pressure in my chest. I have an exercise induced tachycardia that once initiated cannot be stopped without extra help or I will die. I realized the symptoms were present and I was not making headway. I still could not touch bottom.

I turned and looked at the sky and cried out to Jesus for help. The panic that had been rising began to defuse. I could sense His presence, as my arms just kept moving. I could not touch the bottom. Yesterday my Jesus Calling devotional had said,
“Grow strong in your weakness. Some of my children I have gifted with abundant strength and stamina. Others, like you, have received the humble gift of frailty….weak ones like you must live by faith, depending on Me to get you through the day. I am developing your ability to trust Me, to lean on Me rather than on your understanding. My preference for you to depend on Me continually, trusting Me to guide you and strengthen you as needed. This is how you grow strong in your weakness.”

Jesus was calling on me to trust and let Him take over. I kept swimming, even though part of me was saying just quit, you can’t make it. He took over and I began to make headway. My totally fatigued muscles kept working as I looked to shore and my wife. I just kept saying Jesus…Jesus…Jesus! The algae was blocking my breathing and sand stung my eyes, my ears clogged. Then I touched sand with me feet I could push off toward shore. I surged forward feeling a supernatural strength moving through me as I worked my way in. The waves were now ripping me back and forth, but I kept going.

As I began to feel the rock and sand beneath me, the waves just threw me onto the beach rocks. I could scramble up as they shoved me ashore. I was going to make it. Tears were flowing from my eyes as I thanked Jesus for saving me. My power was not enough. The Apostle Paul had cried out to Jesus three times for his thorn to be removed, by God said no,
“My grace is sufficient for you, for my power is made perfect in weakness…That is why for Christ’s sake, I delight in weaknesses, in insults, in hardships, in persecutions, in difficulties. For when I am weak, then I am strong” (2 Corinthians 12:9).

I had written about and prayed this Scripture 100s of times as a principle. But today it became very real as I faced my own demise in an unexpected physical battle for my life. Perhaps God was preparing me for coming attractions where I will need to trust Him completely. Perhaps He was humbling me to realize that in my own strength I can do nothing.  He has healed me miraculously twice before in desperate illnesses. But I have always felt certain strength in my physical ability to overcome. As a former three sports varsity letterman and marathon skier, I did not worry much about holding my own. But today I was reminded that I am no combatant against a violent sea like the Apostle Paul met in a Shipwreck in Acts 27. I must abide in the vine of God continually seeking Him, His wisdom and His strength.

As I write, the trembling has stopped; yet my body is sore like I have been in an awful battle for my life, and I have. I must be wiser and face my mortality even though I know that, “Nothing can separate us from the love of God that is in Christ Jesus our Lord… No, in all things we are more than conquerors through Him who loved us.”  (Romans 8:28, 29).

Today I am thanking God and thinking about those who have gone under in the waves of Hurricane Harvey.
Posted by Frankly Speaking at 10:46 AM