Written in 1968 by Edwin Hawkins, this Grammy winning gospel song went viral when San Francisco based DJ played it. It became controversial with Christian pastors complaining that it was being played on pop radio. It is very sad commentary when Christians have trouble how the gospel goes out. The Apostle Paul told the Corinthians that he did not care how the gospel went out, whether from Apollos, Cephas or himself.

Edwin Hawkins said of his song, “I think that it’s not just the song, but the gospel itself that transcends any racial barrier, language barrier, all of that.”  Yes, as Isaiah the Prophet said, “As the rain and the snow come down from heaven, and do not return to it without watering the earth and making it bud and flourish, so that it yields seed for the sower and bread for the eater, so is my word that goes out from my mouth: It will not return to me empty, but will accomplish what I desire and achieve the purpose for which I sent it. You will go out in joy and be led forth in peace; the mountains and hills will burst into song before you, and all the trees of the field will clap their hands” (Isaiah 55:10-12).

Sing a new song the psalmist says often, “Sing to him a new song; play skillfully, and shout for joy” (Psalm 33:3).  I like the old hymns and the new praise songs. Worship wars continue, but the word of God goes out in many ways to many people in many places throughout the word to the praise of the Lord.

Posted by Frankly Speaking at 8:56 AM Leave a Comment

Posted by Frankly Speaking at 4:30 AM Leave a Comment

“The wicked are like the chaff that the wind blows away”  (Psalm 1:4). Now there is a scary verse. We have a choice to be blown away or not. We can be wicked and follow our own path. Or we can be righteous and seek after God. Those are the only two choices. You love the one and hate the other.  Solomon after chasing after and having everything in the world, considered it all meaningless like “chasing after the wind”  (Ecclesiastes 2:11). That is until at his life’s end when he said, “Now all has been heard; here is the conclusion of the matter: Fear the Lord and keep His commandments, for this is the whole duty of man” (Ecclesiastes 12:13).  Carpe Diem, seize the day is what he is saying. But not doing it “my way,” but the Lord’s.

You have participated in or seen the harvesting of grain, when the chaff and wheat are separated by throwing them into the wind and letting the chips fall where they may, so to speak. The good grain stays in a pile and the useless is no more. God is speaking through Hosea, the prophet, when He says of those who don’t follow after Him, “They sow the wind and reap a whirlwind.” Yes, we reap what we sow. Sometimes it takes a while to show up, but eventually the crop will appear, good or bad.

The wind blows wherever it pleases the Gospel of John reminds us. Ephesians 4:14 tells us, “There is every wind of teaching,” so be discerning and know what is right.

Jesus calmed the winds with His voice, just as He brought creation with the same voice. It is the still small voice or whisper of God that we want to hear as Elijah did as he stood on the mountain in 1Kings 19:12. He will speak and strengthen us for the journey, giving us the direction to travel. God’s word is “the Way, the life and the truth,” no other voice is to be listened to and followed. We will have trials like Elijah. We need to be reminded of James teaching on storms, to ask for wisdom from God, who will tell us generously what and how to respond to “make us mature and complete, lacking nothing.”

We need the wind to fill our sails and dry the lands after floods. We can’t control the winds, but we can harness them for our benefit. Do so by listening to the voice of God and obey.
Posted by Frankly Speaking at 4:30 AM Leave a Comment

The waves and the winds of the world seem to be growing larger and stronger. Are you tossed and blown about by the winds and waves of life? Well, I think we are all getting wet and chaffed, whether we want to or not. But I think we can protect ourselves somewhat from the deleterious effects.

I put on my Gortex® suit when the skies are gray and the rain is coming down. It helps a lot, along with an umbrella. However, last week my umbrella turned inside out as the winds blew the rain horizontal. You all know the situation and your response. We need the rain, but we don’t like the effects.  So what are the best protections or coverings for these storms of life?

James 1:2-6 tells us that all of God’s kids are getting it. “Consider it pure joy, my brothers and sisters, whenever you face trials of many kinds, because you know that the testing of your faith produces perseverance. Let perseverance finish its work so that you may be mature and complete, not lacking anything.  If any of you lacks wisdom, you should ask God, who gives generously to all without finding fault, and it will be given to you. But when you ask, you must believe and not doubt, because the one who doubts is like a wave of the sea, blown and tossed by the wind.”  Trials and temptations will come, but we must ask for wisdom from God, not why, but what and how to do it. Otherwise we will be blown around like a wave in the wind. I can feel the spray on my face as I write. It can feel good when we know what we are doing on a sailboat as it reaches out, or not. It is best to wear a slicker and even a rain hat with a chinstrap to best ride out the storm.

As Christians in an ever increasingly difficult world, we need to be prepared. How do we do that?  Start with prayer. This is asking God without doubt as James tells us. He answers all our prayers, unless we have the wrong motivation or have un-confessed sin in our hearts. Then He will not hear our cries. I believe if we pray in faith, God will answer us with directions.  Most of these are clearly stated in Scripture. God’s responses will be in accord with the Bible, His word. Remember, it was spoken into existence like the world.


God is preparing and building us up to be able to handle the seas of life. In Ephesians 4 Paul tells us that God is preparing His people for works of service, “so that the body of Christ may be built up until we all reach unity in the faith and in the knowledge of the Son of God and become mature, attaining to the whole measure of the fullness of Christ. Then we will no longer be infants, tossed back and froth by the waves, and blown hear and there by every wind of teaching and cunning and craftiness of men in their deceitful scheming. Instead, speaking the truth in love, we will in all things grow up into Him who is the Head, that is Christ” (Ephesians 4:12-15).  He is telling us that we should be children of the light for in the world there is darkness that is corrupting whoever is ignorant of the truth. 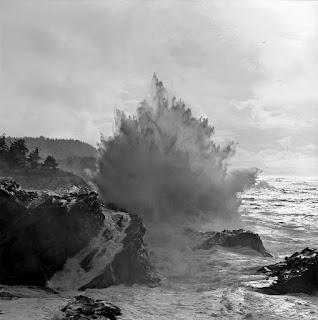 I love the psalms that tell us “He will cover us with His feathers” (Psalm 91:4). God also covers our sins with His love. This is a message of His blood shed for us on the cross that our sins may be covered and/or forgiven.  Paul also tells us in Colossians 3:12-15 to be clothed or covered in “compassion, kindness, humility, gentleness and patience. Bear with each other, and forgive whatever grievances you may have against one another. Forgive as the Lord forgave you. And over all these virtues put on love, which binds them together in perfect unity. Let the peace of God rule in your heart… and be thankful.”  You are being clothed with Christ as you are baptized in Him as Galatians 3:27 tells us. He is our protection and covering as He directs our paths in the storms of life.

Posted by Frankly Speaking at 4:30 AM Leave a Comment

In the story of Jesus feeding the 5000, actually closer to 20,000, in Matthew 14 of the disciples saying, ‘We have only five loaves of bread and two fish… and Jesus responding, ‘Bring them here to me.’”  I am fascinated that only one person had any food, a little boy. I am also amazed that the parable is about the miracle of feeding all the people and even having bounty of 12 bushels left over. As I read it again, I marvel at Jesus’s ministry to thousands, and yet He did not call the boy forward to receive a blessing or thanks. Actually the Gospel of John is the only rendition of the story where Andrew, brother of Peter even mentions the boy saying, “Here is a boy with five small barley loaves and two small fish.”  The parable is about Jesus meeting human needs and points towards Himself as the Bread of Life.

Why doesn’t Jesus even recognize the boy and the lunch He took from him?  Perhaps He does by indicating that the boy’s lunch was given and provided for a massive lesson for all. Was it important that it was a child? I think it adds to the lesson’s power, since they were nothing in that culture. Even the “Little ones” are important to the kingdom. Jesus certainly makes that point in Matthew 19 on how important it is for the children to not be hindered in coming to Him, “For the kingdom of God belongs to such as these.”  Yes, children are important. But why not identify the child in the bread parable?  The child’s lunch was taken, but returned and more when all were fed. In other words, Jesus provided much more than the little one’s lunch. He wanted all to benefit. That does not say that the kid was selfish, it says that Jesus is bountiful.  The kingdom of God is for all who will come and so they did that day. Not all heard and believed, but all were provided sustenance. The child was available and that’s what He asks of us.

That’s the way today. God provides us all with lunch and life and everything else. But few recognize the “indescribable gift” and believe.

As I think about the parable, I would have picked up the kid and hugged him, saying how important he and his lunch were to the kingdom. Instead it is written in Scripture for all posterity to read and understand more of the Only One with God’s power to provide out of a small lunch or even out of nothing that the whole world may know.
Posted by Frankly Speaking at 4:30 AM Leave a Comment