The Ark and Arc of the Covenant

In Genesis 9 we read the story of the great flood and God’s desire to start over with the human race. He had endured enough of disobedience and sin. So He commanded Noah to build an ark to house animals with his family to survive a flood over all the earth. Noah, taking an unbelievable 100 years to complete, built the ark to detailed architectural design. Noah was 600 years old when God sent the 40 days and nights of rain to flood the earth and the ark floated until the rain stopped.

We read that God made a covenant to never flood the earth again. He demonstrated this covenant with a rainbow in the sky. Today we remember this covenant that God continued with other patriarchs. Today we have conflated this pact with lepricon stories of a bucket of gold at the end of the rainbow.  I think few people understand God’s faithful covenant with His people to always be we with them and never leave them. 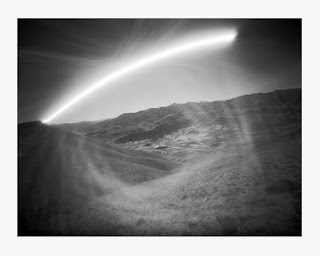 The photo in this essay was taken by my cousin Douglas F. Frank, a renowned landscape photographer. It is a 6-hour pinhole exposure that gives it an almost living and ethereal quality. It is called “The Arc.” This light arc is formed by sunlight moving through the aperture over a long and enduring period, like our lives. Notice the almost lunar landscape background of the Oregon desert.  It recollects from Isaiah’s ancient prophecy; on, “The people walking in darkness have seen a great light; on those living in the land of the shadow of death a light has dawned” (Isaiah 9:2). This light is almost too bright to gaze upon with unprotected eyes. Later in his prophetic work 700 years before Christ he says of Jesus’ crucifixion and resurrection, “After the suffering of His soul, He will see the light of life, and be satisfied”  (Isaiah 53:11).  I am again reminded of God’s rainbow covenant light reflected in the skies declared to be everlasting. “I will make a covenant of peace with them; it will be an everlasting covenant” (Ezekiel 37:26). This is a covenant of prosperity and peace forever, even though His people would break their promises.

Now comes a new covenant again prophesied by Jeremiah saying, “The time is coming, declares the Lord, when I will make a new covenant with the house of Israel and with the house of Judah. It will not be like the covenant I made with their forefathers when I took them by the hand to lead them out of Egypt, because they did not remain faithful to my covenant…This covenant I will make with the house of Israel after that time, declares the Lord. I will put my law s in their minds, and write them on their hearts, I will be their God and they will be my people…because they will know me…By calling this covenant “new,” He has made the first one obsolete; and what is obsolete is aging and will soon disappear” (Jeremiah 31:31-34, Hebrews 8:8-12). When does it come? It arrives with the incarnation of Jesus Christ as Isaiah again prophesies speaking of the One to be born of virgin who was to be called Immanuel (God with us). “For to us a child is born, to us a son is given, and the government will be on His shoulders. And He will be called Wonderful Counselor, Mighty God, Everlasting Father and Prince of Peace. Of the increase of His government and peace there shall be no end” (Isaiah 9:6-7). Most readers are very familiar with this passage recited at Christmas time and referencing the birth of Jesus, the Messiah.

So the new covenant was born. He is Christ the Lord. We continue to remember Him who lived, taught and then suffered and died for our sins that we might be forgiven and saved from our sins. In Holy Communion we take the cup saying, "This cup is the new covenant in My blood, which is poured out for you, do this in remembrance of Me” (Luke 22:20). This is a covenant or relationship between God and His people beginning in Genesis and faithfully kept by God through the Old Testament times to the promissory Davidic times to the New Testament. But then God in Jesus Christ had to renew it because His people had broken it. The throne of  the Davidic Covenant of an everlasting throne was reestablished in Christ and His atoning sacrifice of blood for His people. It once more was to supersede the broken law to make a new everlasting one in Him. He was the Pascal Lamb and covenantal meal. He was and is the glorious coming King and Messiah, the Son of David forming the important link between Old and New Testament covenants. This fresh covenant will obtain until the Parousia or second coming of the Messiah to rule and reign.

Returning to Ezekiel’s prophetic vision of the glory of the Lord, speaking of heaven and the Revealing of Christ says, “And brilliant light surrounded Him. Like the appearance of a rainbow in the clouds on a rainy day, so was the radiance around Him. This was the appearance of the likeness of the glory of the Lord” (Ezekiel 1:27b-28). This vision is repeated in Revelation speaking of the throne in heaven saying, “A rainbow, resembling an emerald, encircled the throne…then I saw another mighty angel coming down from heaven. He was robed in a cloud, with a rainbow above his head; his face was like the sun; and his legs were like fiery pillars” (Revelation 4:3; 10:1). This is the Shekinah glory of God appearing in our midst. This is the symbol of the fact that, “God is light, in Him there is no darkness at all” (1 John 1:5). This is the ever-present covenant relationship He has made with us, to bring brilliant and lasting light in the darkness. This is the arc or light in the many colors of a rainbow, signifying God’s faithfulness. Next time it rains and the sun shines look up for God’s covenant of peace and praise Him.
Posted by Frankly Speaking at 4:30 AM