Do you ever feel closed in by the world or choices that you have made? Do you fear that you can’t get out? Well, I think that this is a common fear many humans have. 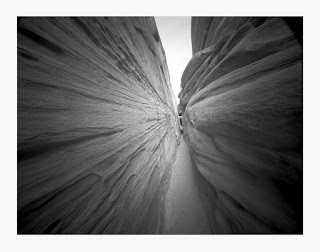 Maybe you have dreams, or better said, nightmares of being in a narrow canyon like the one in this pinhole photo by my cousin, landscape photographer Douglas F. Frank.  I have bad dreams of not being able to escape from a situation. Usually there is wet concrete and my feet are stuck in it. Or there is this wolf chasing me and I awake just in time.  Enough of that, it’s making me nervous.

We all have imagined or had had very real trials in life where we feel like we are in a boxed or narrow canyon. Sometimes we cause them by our decisions or deciding to procrastinate.  There are consequences to decisions. Sometimes our fear or trial comes from the way we think about it. They are just a major part of human existence. Do we have a confident sense that we can overcome it, or believe that with the help of God and others that we can? Or are we afraid and even angry at the problem and it is bringing negative or dark attitudes of fear and or envy? There is an old Cherokee Indian legend called “Two Wolves” that speaks to this concern.
An old Cherokee is teaching his grandson about life. “A fight is going on inside me,” he said to the boy.
“It is a terrible fight and it is between two wolves. One is evil – he is anger, envy, sorrow, regret, greed, arrogance, self-pity, guilt, resentment, inferiority, lies, false pride, superiority, and ego.” He continued, “The other is good – he is joy, peace, love, hope, serenity, humility, kindness, benevolence, empathy, generosity, truth, compassion, and faith. The same fight is going on inside you – and inside every other person, too.”
The grandson thought about it for a minute and then asked his grandfather, “Which wolf will win?”
The old Cherokee simply replied, “The one you feed.”

Good and evil exist and one wants to destroy your life. There is a Satan, or evil one who was thrown out of heaven and vows to kill all humans. This is frightening to most people.  However, there is a solution to this threat.

In the creation of the first humans, Adam and Eve, there were already angels existing. It is written in Scripture that the most beautiful, the archangel Lucifer wanted what God had, supremacy. So he rebelled and was thrown out of heaven, along with one-third of all angels who also rebelled against God. They became dark or evil angels who as spiritual beings roaming the earth like roaring lions, “looking for someone to devour.” (1 Peter 5:6).

Some 2000 years ago God sent His Son to earth to live, teach the truth and die for all humans. His death on the cross was voluntary and necessary for the redemption of sin of all peoples as a result of original sin by the first humans.  His death brought the forgiveness of sins for all who would believe that He died for us and receive Him as Savior and Lord.

God in Christ Jesus taught us how to live a life like the good wolf in the legend whose traits were like the fruit of the Spirit, “Love, joy peace, patience, kindness, goodness, faithfulness, gentleness and self-control” (Galatians 5:22-23). We are told that there is nothing that can against the power of the Holy Spirit living in a believer. We have all sinned and will continue to, except by the power of the transforming Holy Spirit living within us. If we build our faith through the Spirit and our own self-control or discipline we are feeding the good wolf. We are purifying and being purified by God in His righteousness. This cleansing can overcome the negative traits of the evil wolf that are the lies of Satan.

Hardships in life can cause us to doubt, but God uses them to help us persevere and become mature and complete lacking nothing. God will give us the wisdom to do this if we ask without doubt as James 1:2-6 expounds. This process is strengthening us to overcome evil with good as we feed the good wolf.
Posted by Frankly Speaking at 4:30 AM