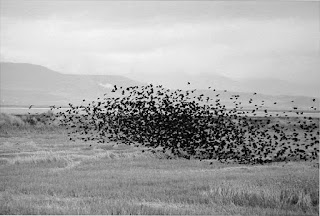 Do you flock together? Is it for safety, or to be part of the in crowd? Do you migrate with your flock? Do you stay with the flock because you are of one body, the church?
“Then Jesus told them, ‘“This very night you will all fall away on account of me, for it is written: “‘I will strike the shepherd, and the sheep of the flock will be scattered.’” (Matthew 26:31). Have you scattered or are you equivocating about Jesus, the Word under the increasingly harsh criticism of the world?

Jesus predicted that His disciples would fall away from Him when He was struck down on the cross. It is true, just as the Israelites had been scattered in the Diaspora by cruel leaders exploiting and enslaving them. Some say this scattering is good as the word of God is spread out. It is a little like the 3000+ denominations we have established. Some say it is good because at least the word gets out. I believe that for the most part new denominations were formed by men who wanted control over the flock or wanted their own flock. It in my opinion they were caused often by the selfishness and arrogance of man working to persuade and control, sometimes for good purposes, sometimes not. Political decision-making is common in national church meetings that attract fringe voters. But Paul said of the church, “For just as each of us has one body with many members, and these members do not all have the same function, so in Christ we, though many, form one body, and each member belongs to all the others” (Romans 12:4-5). Jesus wanted one body, the church universal as the Apostle’s Creed speaks. He meant for us to be believers together in thought, word and deed, meeting in separate places around the world. We are to uphold biblical truths uncompromisingly. Now we meet in separate places excluding those who do not think like us or compromising to be inclusive. What a sad separation from Jesus’ plan. Who do we think we are? Where did we get this extra-biblical call to change the perfect plan of God?

On the night of His arrest and false imprisonment the religious ones who wanted control and were threatened by the way, the truth and the light, made assurances that He would be killed. Yet on the third day He rose from the grave to new life and ascended to His throne in heaven. Here He rules and reigns and He will return soon.

I am part of the flock which hears and by His Spirit tries to heed the voice of Jesus. He will separate the sheep and goats, the believers from the herd. There are false teachers who try to sneak into the sheep pen to deceive and lead astray. Our nation is full of them today. In fact, Christian teachers are shunned and being pushed out wherever possible. It seems our country has moved from the Post-Christian era to the Anti-Christian one in only a couple of decades.

Historians speak of the fall of societies saying that they last a maximum of 250 years. We have outlived our lifespan unless there is a Christian renewal and restoration. But this requires repentance, a turning around and revival.  It can happen, but it is unlikely with the animus and anger that pridefully exists in our country. The greatest division since the Civil War is here, even with bloodshed beginning and being paid for by radical fringe elements. Revival starts with each of us. Search your heart and know who is God. We must live uncompromised lives through the gospel, in the fruit of the Spirit. This is a giving and serving life, modeling Christ.

Sheep are not stupid; they follow a shepherd. And the Christian Shepherd is the King of Kings and Lord of Lords, Jesus. He has risen and is returning soon to rule and reign and bring wrath upon non-believers. There is still time for all of us to change. God is returning soon to take His sheep with Him to heaven, the Rapture spoken of in 1 Thessalonians 4:18.

So, the rant has been written. Yes, I am upset that our country has seemingly thrown out our founding principles, based on the Bible and Judeo-Christian theology, based on the constitution.  The constitution is not a culturally changing manifesto to open thinkers. It is established on the Rock on purpose. Tolerance of a harsh and intemperate thinking that excludes Christianity cannot be tolerated. We are not to be legalistic, but caring and standing on principles of compassion in God’s power.
Posted by Frankly Speaking at 4:30 AM